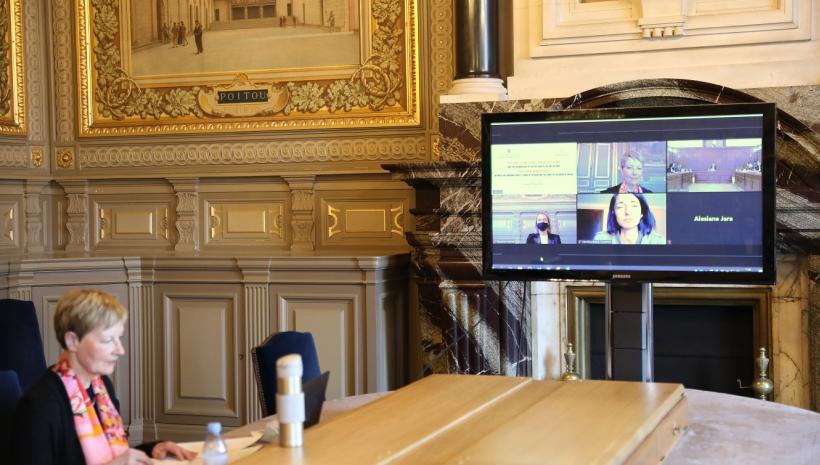 On 19th April 2021, First President Chantal Arens had a meeting by videoconference with Mr. Nguyen Van Du, Vice-President of the Supreme People’s Court of Vietnam, with the participation of the French Embassy in Hanoi.

During this meeting, First President Chantal Arens expressed the wish of the Cour de cassation (Court of Cassation) to strengthen its bilateral cooperation with the Supreme People's Court of Vietnam, despite the current sanitary context that impairs international cooperation. The cooperation between the two courts is rich and ancient, and led to the conclusion of a twinning agreement signed in 2003.

The Vice-President of the Supreme People's Court of Vietnam underlined the quality of the cooperation between the two courts and welcomed the new prospects for cooperation. He indicated that the expertise of the judges of the Cour de cassation (Court of cassation) who participated in seminars and missions in Hanoi provided Vietnam with a source of inspiration for reforms currently carried out.

This exchange allowed First President Chantal Arens and the Vice-President of the Supreme People's Court of Vietnam to express their common will to establish a judicial cooperation project, whose implementation is scheduled between the last quarter of 2021 and the first quarter of 2022. This cooperation plan will take the form of high-level study visits to Paris and Hanoi (subject to improvement of the health situation) and experts seminars by videoconference. Among the themes proposed for future meetings, the protection of the environment, the protection of minors and the resolution of intellectual property disputes have been suggested.

Following the meeting between the First President of the Cour de cassation (Court of Cassation) and the Vice-President of the Supreme People's Court of Vietnam, the judicial cooperation project was discussed by the international relations departments of the two courts, with the participation of the French Embassy in Hanoi, in order to prepare its implementation.