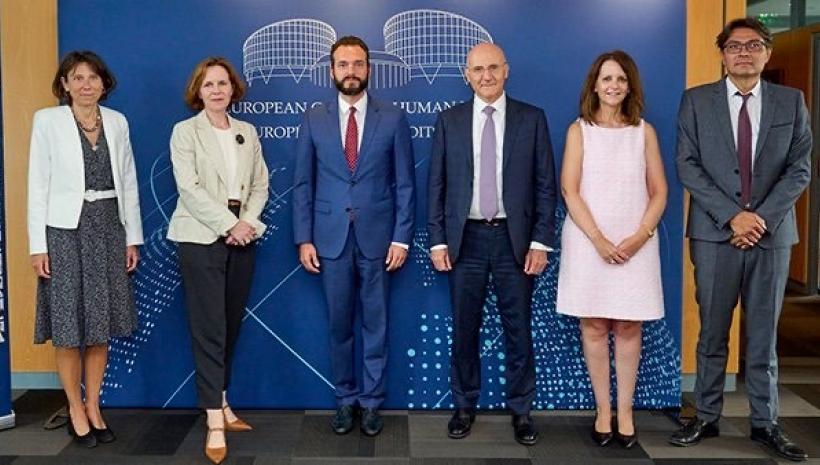 On 6 September 2022, the First President made his first visit to the European Court of Human Rights (ECHR) in Strasbourg.

With this first symbolic visit, the First President showed his strong attachment to this institution and to the human rights guaranteed by the Convention for the Protection of Human Rights.

This visit provided an opportunity for in-depth discussions with the Court's various careers.

The First President, accompanied by President Sandrine Zientara, Director of the Documentation, Studies and Report Department, met President Spano, Vice-President Siofra O'Leary, French judge Mattias Guyomar, and Registrar Maria Tsirli. This exchange was an opportunity to recall the history of the ECHR, to evoke the major organisational reforms of the two courts, in particular concerning the orientation and treatment of cases, and to establish a first assessment of the impact case strategy at the ECHR, in line with the concerns of the Court of Cassation regarding the orientation of appeals.

After this meeting, the First President and President Zientara had the opportunity to discuss with Judge Mattias Guyomar and the French jurists and legal experts of the ECHR, who explained more thoroughly the application process and their working methods.

Finally, in the afternoon, President Zientara met with Jurisconsult Anna Austin. They shared common concerns on research and dissemination of case law as well as the various tools available to judges. The day ended with a meeting with the Council of Europe's Department for the Execution of Judgments, which provided an opportunity to discuss in a concrete manner the challenges of disseminating European case law for the Documentation, Studies and Reports Department.

This variety of meetings helped to understand the different functions of the ECHR.

This first visit by the First President illustrates the close links between the ECHR and the Court of Cassation and has once again enabled the convergence of the concerns of the two institutions to be noted and the desire to pursue closer cooperation to be reaffirmed. In this sense, the new judges of the Court of Cassation will be welcomed, as traditionally, for a training course at the ECHR next October.